On my last full day at Easter Island I woke at the campsite to a bright, crisp, clear, sunny morning, and decided that I would again climb to the top of Terevaka volcano for the amazing view. After a quick breakfast I was off on the scooter, and parked by the spectacular “7 Moai”, and within the hour was on the summit again.

I really enjoyed the climb, and the view was so much clearer than the previous day. You really could get a feel for how isolated the island is. Take a look here:

After a bargain empanada lunch at a takeaway van I went to the museum, which gives a fascinating overview of the history and culture of the island. From what is known they had a very rich society and culture, but the arrival of the European explorers in the 18th century changed things forever. Due to several combined factors, including famines, epidemics, civil war, slave raids, colonialism, and near deforestation, a population believed to numbered somewhwere between 7,000 and 17,000 was decimated, and in 1877 only 111 Rapa Nui people survived, and so much of their history was lost. Of these 111 only 36 had offspring, and all Rapa Nui people now claim to be descended from these last remaining 36.

Once again, more information, told in a much better way than I can explain it, can be found at Wikipedia here.

On my last evening Andres and I arranged to meet for a beer or two with Diana and her guests, and Roberto, the third couchsurfer on the island came along too.

It was the first night of a big Rapa Nui festival on the island, and we went along to watch some of the singing and dancing, and then at midnight, as the full moon climbed higher in the sky, Roberto, Diana and I decided to take a drive out to Anakena Beach. The full moon illuminating the dark and silent moai was very atmospheric.

The next morning I took my large bag to the airport and checked it in, and then kicked around at the campsite for the rest of the morning, I had a quick lunch and went to drop Andres’s scooter off, and he very kindly took me up to the airport to see me off.

It really has been a fantastic week on the island. It is such a beautiful and unique place, and it has been great to see it through the eyes of people who live there. Huge thanks to Andres, who has made the week such a pleasure, and has been so helpful and generous. I hope I get to return the favour soon. Thanks also to Annette for our day out in her hire car, and to Diana and Roberto too, and of course, not forgetting the people of Easter Island for their wonderful hospitality.

If you ever get the chance, I highly recommend you go to see Isla de Pascua. 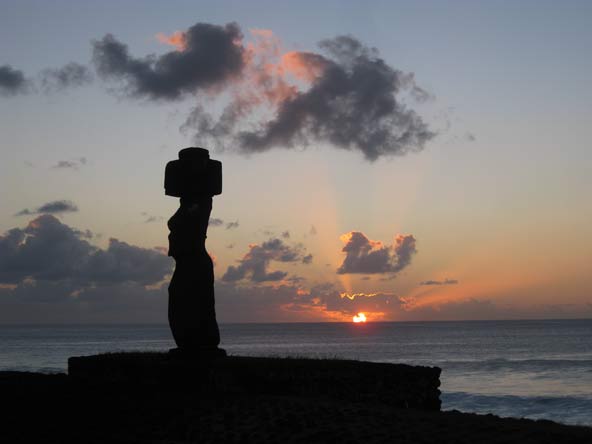