During the daytime over my first week on Christmas Island I have had to pretty-much entertain myself, as most of the other people I know here have to work, of course. But as Friday afternoon approached I got to see a different side to island life, and an idea of how full the weekend would be.

Rob and a few of the other teachers would be going for a round of golf on Friday afternoon, and I was invited to join them. I lined up a few excuses for my up-coming poor performance, and joined Rob and John, who I already knew, and Tim and Aaron, and with some borrowed clubs and hopefully enough balls to get me around the course (I always expect to lose a few!), we teed off.

The course is in a spectacular location, the sea off to one side, and huge Jurassic Park-style cliffs and jungle to the other side, the beautifully kept fairways themselves being lined with coconut palms – a few of which I managed to hit during the game.

Apparently at times during the early evenings the fairways and greens can become covered with crabs, but most of the males seem to have headed back inland now, and there were only the dead bodies of those poor crabs that had not made it back across the hot wide expanse of the golf course.

I was quite impressed with my first drive right down the middle of the fairway, and continued to be surprisingly pleased with myself for most of the rest of the nine holes. I made a few bad strokes, but less than I expected to.

Friday afternoon golf has many competitors, and ultimately scores are added up, beers are drunk, a few small prizes given out, and one unfortunate loser has to wear a toilet seat around their neck for the rest of the evening! After handicaps were taken into account, I was impressed that I had managed to avoid this fate by a couple of strokes!

Afterwards there was a great curry – school camp leftovers – and more beer of course, and then I was dropped off in town for the next event of the weekend.

My couchsurfing host Braydon had been working on a video edit of an event he had helped organise several months earlier, and was screening “The Christmas Island Amazing Race – Teen Edition” on the big screen outdoor cinema in town.

I chatted with Gordon, island taxi-driver and cinema refreshments purveyor, and bumped into Claire, one of Braydon’s work colleagues, who had made us a fantastic dinner earlier in the week. I sat with Claire and watched, very impressed, the very entertaining production. Braydon, and others involved had obviously put in a huge amount of work, and the competitirs were obviously thoroughly enjoying themselves.

On Saturday morning I joined Rob, John and Tim again, and along with Dave went to explore Daniel Roux Cave. The island is mainly limestone, and so there are quite a few caves. The one we explored involved a long climb down numerous ladders, then a walk/swim through fresh water until there is light at the end of the tunnel, and you can see where, with a longish swim-through, the cave exits to the ocean. I considered the swim out, but decided against it without fins – apparently it is quite a long way, with no stop-off point once committed. 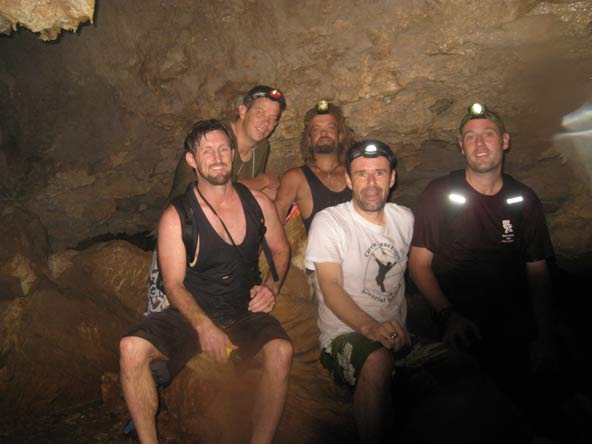 Both Braydon and I went snorkelling in the afternoon. The bay right outside Braydon’s front door is incredible, packed with the most amazing corals and fish right at the shore. There is a huge drop-off where the seabed drops away a few metres from shore down into the dark blue depths. It is quite an eerie feeling to swim along over the coral covered bottom, and then out over the void, with the steep wall just disappearing down into the blue.

We had a birthday party invite from another of Braydon’s work colleagues, Finn, and what was meant to be a relatively quite evening before another big day out turned a bit vague and hazy by the end of the evening. I have no idea what time I got to bed, but didn’t feel too great the next morning as I prepared for a big caving expedition.

A group of us, led by yet another of Braydon’s colleagues Chris, made our way down a steep path, and then struck off into the jungle, following the directions on Chris’s GPS unit. It was hot and sweaty going, and with machetes we battled through the thick undergrowth, and over the sharp limestone pinacles.

We climbed back up some steep cliffs, but over four hours into the trip we still had not found the cave! There was some doubt now about the GPS co-ordinates, and suspicion that someone had changed them for a joke. Eventually a couple of the group made it to the GPS waypoint, but it wasn’t where the cave should be. We finally made the decision to head back, as we had another four hours return battle through the jungle, and it was now early afternoon.

It was an absolutely exhausting day, and after eight hours of slogging through the hot jungle everyone ws worn out. The only saving grace of the day was the wonderful swim in the ocean at the end. It was a pretty good day of excercise though, and Braydon reckons that after that, the trek to Machu Picchu next year should be a doddle.

Claire had invited me to go diving, but I had already accepted the caving invite. On the drive back from the non-caving expedition Claire sent me a text message saying that they had swum with whalesharks during the diving trip. I should have picked the diving trip, I think!!

It is amazing how busy the island has seemed over the weekend. During the week I seem to have had the place to myself, and even when Brad took me out fishing, we only saw one other boat out there. Over the weekend there seems to be so much going on, with different groups going fishing, caving, diving, swimming, or golfing. The bay was busy with all sorts of boats. What an active place!