I flew into Reykjavik and took the bus into the city. Already things seemed to be living up to the Icelandic reputation of being expensive – or maybe I have just been in Asia too long, where everything is so cheap. In Kuala Lumpur the hour-long coach journey from airport to city centre costs around $3, here the forty minute trip is more like $15. Welcome back to Europe!

I had managed to get in touch with couchsurfer Magnus at the last minute, and we had swapped a couple of messages back and forth. I gave him a ring, and he said he could collect me at the bus station. After dropping my bags off at his apartment, he took me for a bit of a night-time tour around the city, which is very pretty, all lit up for Christmas.

It isn’t as cold as I had expected, temperatures currently just above freezing, but apparently locals are commenting on how unusual that is for this time of the year. The forecast is for colder weather to come.

The next day I took the local bus into the city and spent the afternoon wandering and exploring. The city centre is small, and one or two streets back from the main shopping street you are in quiet residential areas. In the other direction, one block away is the waterfront. The city itself is tiny by most standards, the population being only about 130,000.

I have discovered some surprising things here. The menu in the photo below is for a dinner of peppered whale steak, and I read that Iceland has just given the go-ahead for a controlled level of commercial whaling, apparently necessary to preserve fish stocks. Hmmm. I think it’s perhaps slightly hypocritical to offer “majestic whale-watching experiences” to the tourists, when other boats are out slaughtering the same poor creatures for commercial gain. Sorry, that’s my soapbox bit done!

The other side of the menu was an eye-opener too. The “Wild Game Menu” offers a starter of either smoked duck, marinated goose or smoked puffin (!!) followed by reindeer as the main course. Poor Rudolf!

On the hill above the city centre there is a huge, spectacular church called Hallgrimskirkja, that can be seen from almost anywhere, and later in the afternoon, when it started getting dark again, I went up the tower to see the city from above. 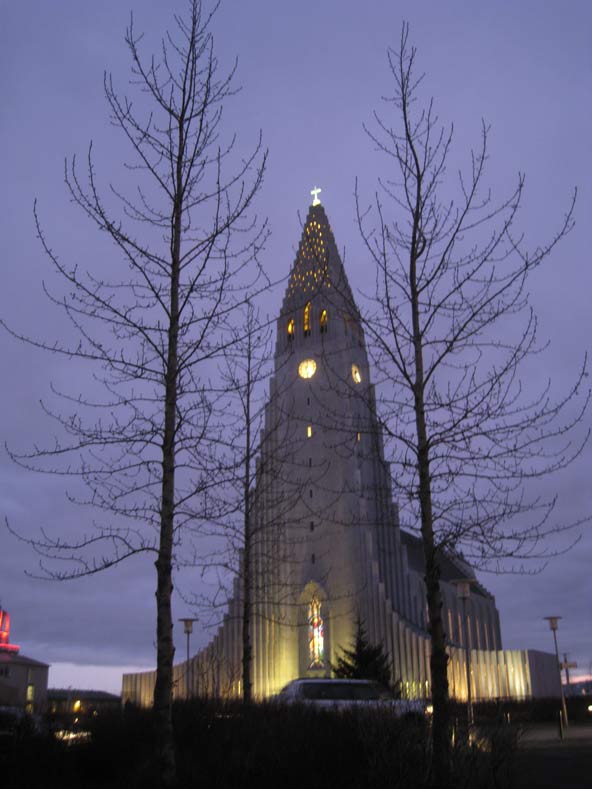 It isn’t light for very long here in the winter. I was amazed when I woke at around 9am that it was still completely dark outside, and it was well after 10am before it even started to get light. It was going dark again not long after 3pm! 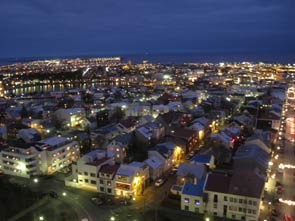 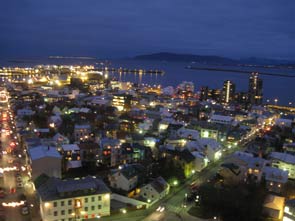 At 5pm I found the cafe where I was meeting Sara, a reporter from local newspaper Frettabladid, and was also joined by Hildur and her friend, whose name I have no idea how to spell! Hildur is another couchsurfer who lives here in Reykjavic, and was introduced to me by another contact here who I know via my ALife4Sale website. It seems that in Reykjavik most people know each other – it is a small place after all.

Today I headed out to one of the geo-thermally heated swimming pools in the city, which was a fantastic experience. Iceland is an active volcanic area, and uses steam from underground to provide electricity and hot water for the whole city. There are natural hot springs and thermally heated pools all over the country.

The one I visited is called Laugardalslaug, and is a fantastic place. There are two 50m lap pools, one inside and one outside, a large play pool with slide, and then a selection of hot tubs and a steam room. After a swim I followed the suggested system of the coolest hot tub first, then sitting in the cold as long as you can, before getting in the next hottest tub. The four tubs are at 38 deg C, 40, 42 and 44. Getting in the last one after being in the zero degree outside air for five minutes is wonderfully invigourating! 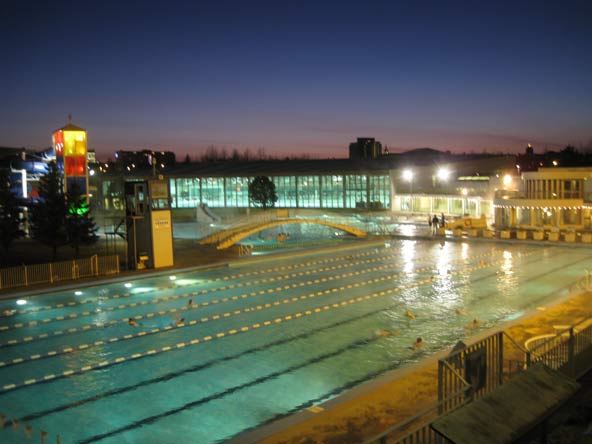 Afterwards I just lay in one of the warm pools gazing at the sky as it went dark. What a relaxing afternoon. It’s a clear night tonight, so there may be a chance to see the Northern Lights later, but the aurora forecast for Iceland isn’t good at the moment. Maybe over the weekend, the forecast suggests.

Finally some random Iceland facts gleaned from the IcelandAir in-flight magazine:-
– Iceland boasts the world’s highest literacy rate, at 99.9%.
– Covering 11% of Iceland, Vatnajokull is Europe’s largest glacier.
– Reykjavik is the world’s most northern capital, and over 85% of it’s energy is supplied by clean and sustainable resources, such as geothermal power, earning it the reputation as cleanest capital in the world.