I was woken early this morning by a call from my very helpful travel representative with a view to sorting out my main flights for the forthcoming trip.

I have been procrastinating a bit, as the house has not sold, but I finally decided, “What the heck? I’m just going anyway, I can leave the house and paperwork in the hands of the estate agent and settlement agent. Should be fine!” I hope it will.

So my first flight is now booked for Sunday 3rd August, just over a week away, from Perth to Dubai, where I arrive early on Monday morning. From there I fly to Nice in France, and have a few weeks in Europe, including the Tomatina Festival in Spain. After that I fly from Madrid to London, have a few weeks in the UK, and head to Germany for beer-swilling at Oktoberfest.

From Germany I fly to New York on 6th October, and am free to travel the States for a few months. My next flight is booked for January from Honolulu to Tokyo, and then eventually back to Australia in February.

I am now officially excited!

I did a bit of work on the map page today, and figured out how to add a Google map, with lines and dates for flights, and pins for the approximate times and dates for achieving the first few goals.

Over the next couple of days I will try to get a bit more information on the map, the calendar and some more details in each of the individual goals that are planned for the early stages. 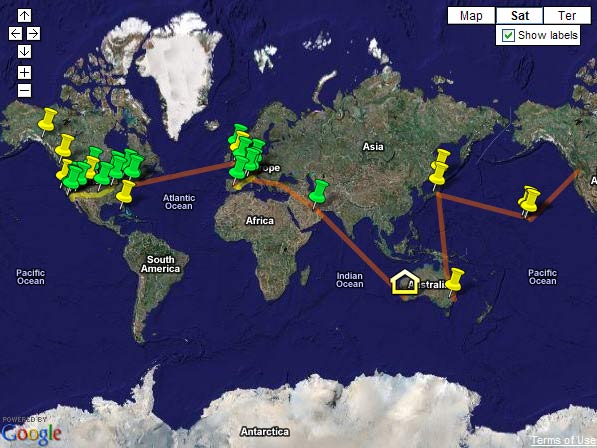 If you are planning any trips, take a look at these guys, fantastic efficient service, and excellent prices:
www.airtreks.com