Yesterday evening Braydon collected me to drive down to South Point, where at the Chinese Temple there was a celebration of the birthday of the Chinese god Kang Tian Tai Di, and everyone was invited. The whole affair was very cheerful, and there was a huge spread of food put on. The was a seer who had flown in from Malaysia for the event, and he cut his tongue with a sword, blessed scrolls, and gave out advice while under the spell of several Chinese gods.

Everyone was welcome to join in, and we received red stamps on the backs of our necks, apparently for good luck, and I got a scroll with some tongue-blood just to be sure!

I wasn’t really sure what was going on most of the time, but Kang Tian Tai Di certainly seems like a friendly sort of god, as apparently he had no problem with most of his Chinese worshipers wandering around the temple with a can of VB beer in their hand!

I had a couple of extra beers at the pub – well, I had to find Simon from the dive shop to pay him for the morning’s dives, and it would have been rude to dash off!

When the alarm on my phone went off at 2.45am this morning it felt like I had only just got to sleep, even though I had finally managed a pretty early night. I got up quickly to avoid falling asleep again, and Braydon picked me up soon afterwards, along with Dylan and Sarah, and we made our way to Greta Beach on the east coast of the island.

After a short walk down a dark forest trail we arrived at a stairway high above the beach, and we could see below the torches of others who were already there. As we climbed down, we could see more of the beach, and it was teeming with crabs. They were everywhere! You had to be really careful where you walked, and if you paused for more than a second or two, there would be crabs crawling across your shoes.

Even more spectacular were the steep, overhanging cliffs, which in places were completely red, no rock showing at all between the heaving, scrabbling masses of crabs. I was surprised that out of all those crabs clinging on upside down to the overhangs I only saw one fall off.

We all watched fascinated as endless streams of crabs made their way down to the water’s edge, and then as the waves covered them, they would lift their claws up and stand tall, bouncing up and down to release the eggs into the sea.

I took my shoes off to go into the water to record some video of this incredible event, and for the rest of the morning had to do my best to avoid the sharp feet of the scrambling crabs. They never nipped though, just climbed over your feet and continued on their way.

As it started to get light the numbers coming down to the water thinned out, until eventually as the sun rose there were just a few stragglers coming down to release eggs. The cliffs were still packed with crabs, and on our walk back to the vehicles, the road, which two hours earlier had been empty, was now alive with brightly coloured, freshly washed crabs heading home, job well done.

It is now a few weeks until the return, when after hatching at sea the tiny baby crabs return to land. Apparently, if there is a big return, it is an equally spectacular event, and maybe one day I will come back to see that too.

Back at home I packed my bags, had some breakfast, and it was time to head to the airport, my fantastic two weeks on Christmas Island at an end. It really is a very special place, with some unique wildlife. My time here has also been made very enjoyable here by the many people who have welcomed me into their lives for the short I have spent here.

Particular thanks to Braydon and Claire, my couchsurfing hosts for their wonderful hospitality, but to everyone else I met too, a huge thank you for making me so welcome, and sharing your amazing island home with me. 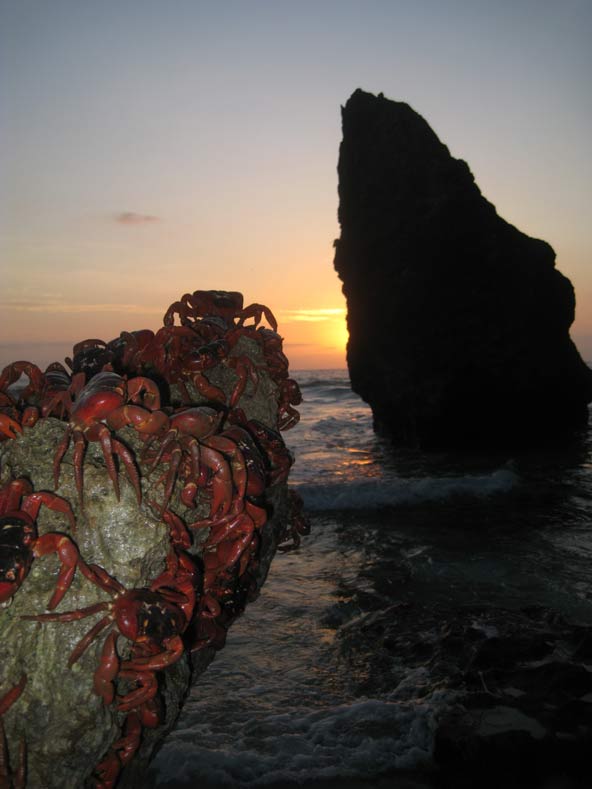