My dad has been a huge influence on much of my attitude to life, and his death at an age that was long before he should have left us certainly influenced my belief that life is short, and if there are things that you want to achieve, you really just need to get on and do them.

His favourite poem was “If…” by Rudyard Kipling, and it has since become one of my favourites too, and offers some excellent fatherly advice. And so it became one of my goals to learn this wonderful piece, and to be able to recite it from memory.

To achieve this goal I really felt that I needed to recite the piece in front of an audience of strangers, and the opportunity to do so presented itself, when I was asked if I would like to speak at an outdoor sports equipment store about my adventures.

Last year I met John Robertson while in LA, and he told me about his daughter Ashley, and the store she and her husband run, and suggested that I might like to speak there. So back in LA again, I contacted John and he put me in touch with Ashley, and a date was arranged. I have been doing some hasty poem revision in preparation, as well as wondering what on earth I am going to say on my first public speaking engagement.

So somewhat nervously I headed to Real Cheap Sports in Ventura this morning, and got set up with a computer and projector, and a few selected photos from my travels.

By 11am here were ten people in the audience, so I was pleased to just creep into double figures, and I made a start. By the end there were a few more later arrivals stood at the back of the group. It was a good sized group for my first try at telling my story, as it was pretty casual and relaxed, and I already knew a couple of the people there, so didn’t feel too pressured or nervous.

By the time I got into it, I really enjoyed doing the talk, and could quite fancy doing a bit more of this sort of thing. I felt it went pretty well myself, and all the feedback I got seemed positive too, but I don’t know if people were just being polite! I don’t think so.

I kept it short, with an intro about myself, a bit of background on the ALife4Sale beginnings of my journey, and then I talked about four of my big highlight goals:-
Swimming with whales
Riding the Wall Of Death
Running with the bulls in Pamplona
Climbing 7 peaks in Colorado
I also talked briefly about my last goal, acting in a movie here in LA, and then suggested that I was hopefully ready to achieve goal # 62.

I got Carina, who had emailed me during the week, having heard about me via Real Cheap Sports email list, to act as video camera person, and launched into my recitation. I had one brief moment of hesitation, which gave me concern for a second or so, but quickly got back on track! Phew! I think it went okay, but you can judge for yourself if you like, by pressing “Play” below:

I am pretty sure that the poem is now fairly well embedded in my memory, and intend to keep it there by occasional practice. It is a great thing to have as a party-piece if I ever need it again.

My thanks to John for suggesting the talk, and Ashley for offering me my first speaking opportunity, and pushing me once more out of my comfort zone. Also to Evan once again for providing accomodation and transport, to Carina, for video camera work, and to the others there who made the effort to come and listen to me. Thank you all.

Thanks particularly to Doug, for making the effort to come along. I was very surprised and flattered to meet Doug, as we have talked a bit on Facebook, and he has been following my adventures since the ALife4Sale days. He had driven from Bakersfield to come to the talk, about a two hour drive. Wow.

After the talk I chatted for a while with some of the people who had come, and then Doug offered to take Evan and I out for lunch, and we asked Ashley for a recommendation. When we picked Mexican, she and her husband and John also decided to join us to. What a great way to celebrate goal #62. Thank you all for a great morning.

Thanks are also due to a couple of other people too. Firstly, to Kelli, who gave me a beautiful calligraphy copy of the poem last year when I was at her ghostly cottage in Oregon. And thanks also to Cari in Florida, who gave me a beautifully printed and presented version of the poem when I was there to visit the underwater hotel. This has been either on the dashboard of the RV, or in the top of my small back pack for the past three months now, and is looking a little worn, but has been the best help ever in learning this poem. 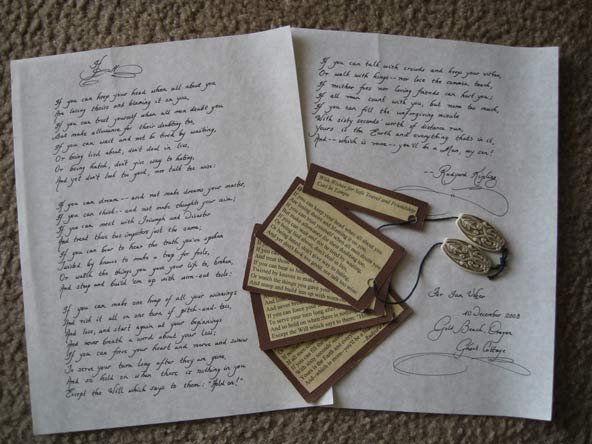 Thanks also to my dad for first introducing me to this timeless advice.

If… by Rudyard Kipling

If you can keep your head when all about you
Are losing theirs and blaming it on you,
If you can trust yourself when all men doubt you
But make allowance for their doubting too,
If you can wait and not be tired by waiting,
Or being lied about, don’t deal in lies,
Or being hated, don’t give way to hating,
And yet don’t look too good, nor talk too wise:

If you can dream–and not make dreams your master,
If you can think–and not make thoughts your aim;
If you can meet with Triumph and Disaster
And treat those two impostors just the same;
If you can bear to hear the truth you’ve spoken
Twisted by knaves to make a trap for fools,
Or watch the things you gave your life to, broken,
And stoop and build ’em up with worn-out tools:

If you can make one heap of all your winnings
And risk it all on one turn of pitch-and-toss,
And lose, and start again at your beginnings
And never breath a word about your loss;
If you can force your heart and nerve and sinew
To serve your turn long after they are gone,
And so hold on when there is nothing in you
Except the Will which says to them: “Hold on!”

If you can talk with crowds and keep your virtue,
Or walk with kings–nor lose the common touch,
If neither foes nor loving friends can hurt you;
If all men count with you, but none too much,
If you can fill the unforgiving minute
With sixty seconds’ worth of distance run,
Yours is the Earth and everything that’s in it,
And–which is more–you’ll be a Man, my son!