This morning the alarm on my mobile phone woke me again just after 6am. I have been hearing a little too much of that alarm recently! But this morning was going to be the only opportunity for the foreseeable future to achieve goal #50.

I have been quietly trying to organise this for many weeks now, and decided in early June, when I had a bit of spare time on my hands, to email Greenpeace, and find out the location of their flagship “Rainbow Warrior”. I was surprised to receive two telephone calls almost straight away, one from Jane in the San Francisco office, and one from Oscar in head office at Amsterdam.

Oscar was keen to help me out, and told me that at the time the ship was docked at Seville in southern Spain, and was I free between 21st and 27th June? I certainly was, as that was just after my wingwalk and Ian Ushers night out, which were both scheduled for the 20th. I looked at return flights from the UK, and found that I would be able to go and return at a fairly reasonable cost. But Greenpeace plans changed unfortunately, and Rainbow Warrior had to move, and I missed out at the time.

Oscar sent me new schedules, and thought that there might be another opportunity to catch up with the ship in Malta around the 23rd of June. Flights would be a bit more expensive, but still within the budget, so I prepared to make my bookings. But Greenpeace plans changed again, and I would not be able to join them now in Malta, Oscar informed me.

The new schedule would give me a chance to catch the ship in Palma, on the Spanish Mediterranean island of Mallorca, but not until 3rd of July. This was the day before I was due to fly out of the UK to Biarritz near Pamplona, and so once again I researched flights. I would have to change the flight that I had booked, and fly instead to Mallorca, visit the ship on the 3rd, and then fly Mallorca to Madrid, and get the bus up to Pamplona. I could just do it, I thought.

But as the day drew nearer, I waited to get the go-ahead from Oscar, and eventually, while walking up one of the ten tors I climbed in Devon, Oscar called me. Believe it or not, he said, plans had changed again, and Rainbow Warrior would not be in Mallorca, but instead at Tarifa on the southern tip of mainland Spain. When I got back from my walk, I checked flights again on the internet, and thought all would work out well. I almost went ahead and booked, as Oscar was very confident. I’m glad I didn’t!

That’s right, plans changed again, and I would no longer be able to meet the ship at Tarifa now. I was practically at the point of giving up. In the end I headed for Pamplona as planned, and thought that it was a shame not to have achieved this goal, especially when I had the time on my hands to be able to do so.

While in Pamplona I tried to stay in contact with Oscar, and he eventually confirmed that the only dates he could get me on board the ship were 17th and 18th July, again in Palma, Mallorca.

Oh dear! I had a ticket from London to Florida booked for the 16th, an underwater hotel booked for the 18th, a flight to Mexico on the 21st, a tour to Chichen Itza on the 22nd, and a flight to San Francisco on the 24th. Would I be able to change my plans, Oscar wondered. Erm, I don’t think so!

Oscar also put me in touch with Marta, the Spanish Greenpeace press officer. I think he was as frustrated by the endless changes as I was. I now asked Marta where the Rainbow Warrior would be prior to the 15th, and she told me there would be only one opportunity to meet it, on the morning of the 12th at Algeciras, for only a few hours as it made preparations to move on again.

And so after a long journey, hampered by changes, as detailed in my previous blog, I finally arrived in Algeciras last night at 10pm, and this morning headed out to find the ship.

It was a beautiful quiet morning as I strode along the deserted breakwater of the huge port, and just before 8am, I found the Rainbow Warrior.

I met Marta, and was taken aboard, and she showed me around the deck area. I was so happy to have made it, and finally get aboard. We chatted for a while, and I was introduced to several of the crew. Marta handed me over to Isabel, another Spanish press officer, as she had to go to a meeting, and we headed below decks. The ship seems to be incredibly well organised, and everything has a place and a system.

For a while I was allowed to wander happily on my own, and looked around the wheelhouse, and examined the iconic rigid-inflatables that are considered to be one of the best-known images of Greenpeace’s work. They are called Avon, Hurricane, and Novi I and Novi II.

I chatted to several others of the crew, and Mehdi, who is chief mechanic asked if I wanted to give him a hand with some maintenance he needed to do. I jumped at the opportunity, happy that I would be able to say that I worked aboard the Rainbow Warrior, even if only for half an hour. By now it was lunchtime, and Marta came to find me, laughing that I had already been put to work. Apparently you can’t sit around on Rainbow Warrior for too long without being given something to do.

After lunch I took a final quick look around with Marta, snapped some final photos, and said my goodbyes. Ah, but I wasn’t going as soon as I thought. Spanish national TV station TVE are filming a documentary on board, and wanted to interview me about my reasons for this being one of my goals.

I told them about how impressed I am by the incredibly brave work Greenpeace do down in the southern oceans every southern summer, when the Japanese come to slaughter the humpback whales there, and how I have been a supporter now for several years.

I was also interested in seeing the Rainbow Warrior, because it is actually the second ship bearing that name. The first one was bombed and sunk in Auckland harbour in New Zealand in 1985, by the French secret service, as at the time Greenpeace were protesting French nuclear tests. On board the current Rainbow Warrior I saw the ship’s bell and a pair of binoculars that had come from the original ship.

I got a picture taken with the film crew, and by then one of the most interesting items on board had been uncovered. Dave, the wooden dolphin on the front deck was built by crew members, and is rumored to contain a secret. Some say it is a message for the world, others think it is a bottle of rum. Marta imagines that it is both of these.

The whole visit was very interesting, and I got a little bit of the sense of family aboard the ship from some of the crew I met. I feel very honoured to have been offered the opportunity to achieve this goal, and once again, in a manner much exceeding my expectations.

Thanks to Oscar and Marta for putting up with my endless emails, when I am sure they had much more important things to deal with. And thanks to all the others I met on board for taking the time to show me around and make me feel so welcome – Isabel, Mehdi, Elvira, and everyone else I spoke to. Thank you all.

I will not even try to explain any of the current campaigns that Greenpeace are working on, or that Rainbow Warrior in particular is involved in. Their website will do a far better job than I ever could. Take a look and should you feel it worthwhile, feel free to offer them your support.

Finally I would like to finish with something that I just learned today – how the Rainbow Warrior got it’s name. It comes from a quote from native American Cree Indians, which reads as follows:

“When the world is sick and dying, the people will rise up like Warriors of the Rainbow…”

The Cree Indian symbol is proudly displayed on board. 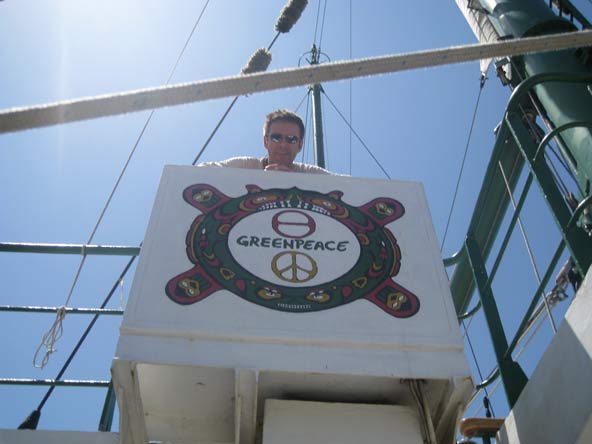