The flight from Vancouver to Whitehorse was only slightly delayed, as our plane had to join the queue to be de-iced, something I have not experienced before. When we finally descended through the clouds the landscape looked white and bleak, and due to another late arrival at Whitehorse, we were unable to de-plane via the airbridge, and had to walk across the tarmac. The temperature was -25 deg C, but I was surprised that it did not feel too bad.

I was met by Moe, who has long been encouraging me to come and visit to go dog-sledding, and after a quick drive around town we headed out to her home and kennels. She lives in a cabin way out in the woods that she built over the winter of 2005.

Life up here is quite different to anything I have ever experienced before. The cabin does not have running water, and on the way there we had to stop at the local community hall to fill several large containers. There is no electricity supply, and power is supplied by batteries, which have to be regularly recharged by a small generator.

Daylight lasts about six hours, from around 9.30am to 3.30pm, so headtorches are worn pretty much most of the rest of the time. And the bathroom, which is merely a pit-toilet is in a small outhouse with the walls covered in frost!

Showers are at the local recreation centre about 50km away! And all heating is provided by a log-burning stove!

By the time we got to the cabin it was already dark, and we went out to feed the dogs. Later on we played air hockey with Neighbour Kim, and it all got very competitive.

The next morning we fed the dogs agin, and Moe picked the ten that would be our team for the day, and they were bundled into the dog box on top of the van, along with a huge amount of gear, and we were off into the wilderness.

Moe had geared me up with a big coat and waterproof trousers, and we a quick stop at a neighbour’s kennel, on the edge of an amazingly beautiful, frozen lake, to collect some snowboots for me. We drove on and parked on the side of a snow-covered road that appeared to be in the middle of absolutely nowhere, and got the sled off the roof, and started gearing the dogs up. 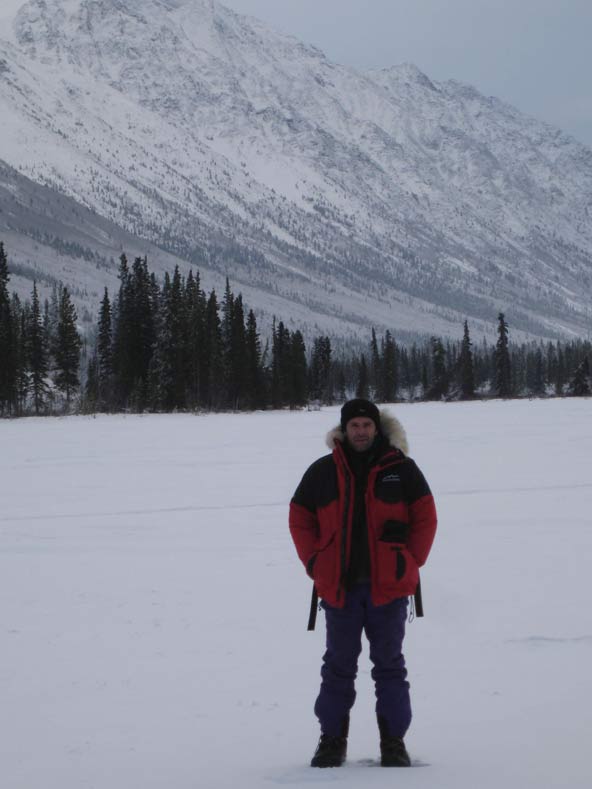 Putting the harnesses on was fun, and the dogs seemed very well trained, and quite happy to have a fumbling stranger attempt to prepare them. Moe had eight dogs harnessed by the time I had managed to gear up the other two.

We clipped them onto the gang line, which is attached to the sled, and the dogs seemed very excited, howling and barking, and pulling at the rope. I sat inside the sled, and Moe removed the anchor from the snow, and silence decended, as all the noise from the dogs stopped as they pulled as one, and we were off.

We gilded along, the only sound being the runners of the sled rails on the snow, and the rattle of snow on the sled cover kicked back from the dogs feet. We travelled quickly at first, but the dogs soon settled, and steadied to a more even pace, and I sat happily watching the snow-covered world glide by.

About twelve miles down the track we veered off the road into the trees and then into a clearing to turn the team around, and after a few dramas getting back on the track, which involved us both rolling around in the snow as the sled went over, we were heading back. Once sorted out, Moe pulled the dogs up, and we swapped places, and I stood on the small footpads on the rails, and felt like a real musher.

I didn’t have much to do really, as the dogs knew where they were going. My main role was to slow the sled a bit on the downhill sections, so the dogs didn’t have to go too fast, but couldn’t help giving them a shout off “Mush, mush!” on a flat section, which did spur them on a bit. 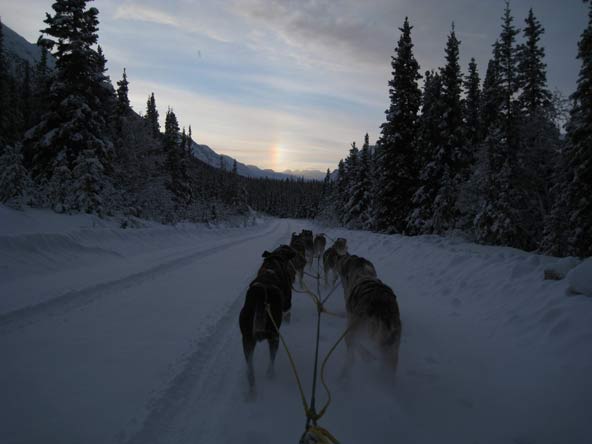 The whole experience was incredible, the surroundings beautiful, and I was so pleased to be able to try out something so different to anything I have tried before. Huge thanks to Moe for making this a reality.