Being away from home for Christmas can be a bit of a challenge, although I don’t actually really have anywhere to call home anymore! But I have often thought about doing something different one Christmas, and the idea of volunteering in a homeless shelter has always appealed, and also seems particularly appropriate this year, as I am semi-homeless myself, albeit by choice, rather than due to unfortunate circumstances.

Vancouver is cold and snowy, and has a huge homeless population. I have talked with a few people here about the problem, and it seems that homeless people in Canada tend to end up in Vancouver, as it is warmer than most other places. Good grief – it’s freezing cold here at the moment.

The problem is huge, and tragically was brought to the headlines just a few days ago when a homeless woman burned to death trying to keep warm, by using a candle in her makeshift shelter.

The problem is only expected to get worse, with numbers of homeless here predicted to triple by the start of the Winter Olympics in 2010.

So over the last couple of days I managed to track down a shelter that still wanted volunteers for Christmas Day, and was scheduled to help out from 8pm until midnight. As I headed down there I felt a bit guilty about the huge, delicious Christmas dinner I had enjoyed earlier with Denise and Duncan. 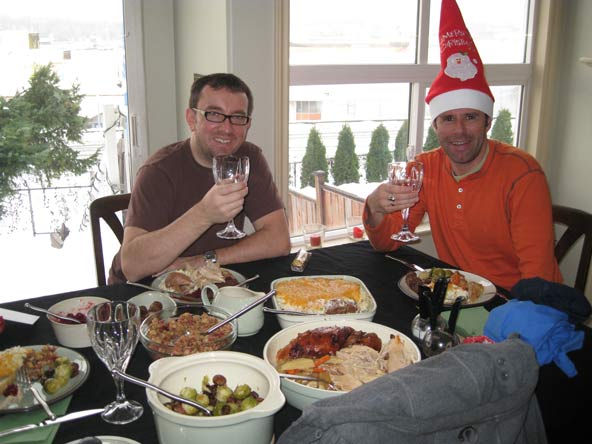 It was a cold and frosty night, and I drove carefully into the city and parked the RV, and made my way to “The Dugout”. I arrived just before 8pm and entered the front door of the shelter, which looked like a very busy cafe, with a huge long line of people stretching out the back door.

I looked for my contact Jackie, and soon found myself serving mashed potatoes, as the long line of people waiting to be fed continued to file past the counter. I chatted with the other volunteers to either side of me (peas and carrots to the left, and gravy to my right) and to the people in the queue.

There was a really festive atmosphere, and everybody was having fun, and I enjoyed meeting the people we were there to help, but I could not help being staggered by the amount of people that filed through. They had been serving food since 7pm, and we continued to do so almost until 10pm. Jackie estimated that we had fed between 300 and 400 people!

I feel a little ambivalent about the experience, and I think it is something that will stay with me for a long time. It certainly has given me food for thought, no pun intended. On one hand I am pleased to have achieved a goal, and glad to have helped out on Christmas Day, but am troubled by the fact that I can just walk away and get on wth the rest of my life. The people there simply do not have that choice.

I talked with Jackie for a while about some of the problems she and her vounteers face, as the try to feed these unfortunate people every day. I am amazed and awed by their dedication, and their selfless generousity. It was an absolute priviledge to work with these people, even if only for a few hours, and to meet many of the people they are helping, who I would normally pass on the street with hardly a second thought! 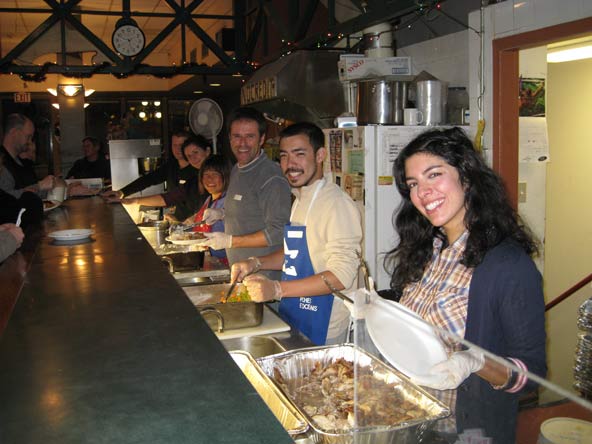 So now it’s Boxing Day morning (26th December), and I am getting ready to head to the airport. There is still a lot of snow about, and apparently there has been a bit of flight chaos there. So I am now about to try to get the RV to the parking lot near the airport, and try to get up to Whitehorse in the Yukon Territory. I fear it might be a long day today!

I am also slightly concerned about the temperatures up there. Averages in January are around -22 deg C. Just below zero here seems bad enough to me – I have become a bit soft having lived in lovely warm Perth in Australia for the last seven years! Oh dear, what was I thinking when I arranged to go to the Yukon Territory in winter?