On Friday I made my way to Las Vegas airport as the day warmed again to reach well into the 70s (degrees Farenheit) by mid-morning. After a bit of a delay the plane took off, and I had a great view of Lake Mead and the Hoover Dam as we flew over. A couple of hours later as we approached South Dakota, I looked down and was amazed to see the landscape covered in snow.

It was dark by the time we landed, and on the ground the temperature was below freezing, and the wind was blowing hard, and I was still in just a t-shirt! Fortunately I had packed a couple of sweatshirts and a jacket in my small bag.

My plan was to pick up a rental car at the airport, but the prices were somewhat alarming, so a couple of minutes with the phone directory produced a company called Rent-a-Wreck. That’s the car hire company I’m after! Ten minutes later Scott arrived at the airport in a nice little Kia, at the bargain price of $32 per day, and after a brief bit of paperwork, and a few directions I was off.

It had been snowing, and the roads were a bit treacherous, but I soon found a motel, and a nice diner next door for dinner, and settled in for the evening to plan the next few days, which were starting to look very full. There seems to be plenty to see and do near here.

On Saturday morning the first port of call was Mount Rushmore, to achieve the goal I came here for. Once again, it dawned fine and sunny, and I drove up into the scenic Black Hills of South Dakota. When I arrived at Mount Rushmore, I was told the weather had been horrendous the day before. I really am being blessed by perfect weather!

Mount Rushmore really is quite spectacular, the scale of the accomplishment is quite breathtaking, and very inspiring too. It really is incredible what people can achieve when they have a dream.

I first became aware of Mount Rushmore as a child when my dad introduced me to the Alfred Hitchcock 1959 classic, North By Northwest, starring Cary Grant and Eva Marie Saint. Well worth watching – highly recommended.

Mount Rushmore was carved by sculptor Gutzon Borglum, and one of the things he wrote about his work was, “Hence let us place there, carved high, as close to heaven as we can, the words of our leaders, their faces to show posterity what manner of men they were. Then breathe a prayer that these records will endure until the wind and rain alone shall wear them away.”

The four presidents depicted are, in the order they appear on the sculpture, George Washington, Thomas Jefferson, Theodore Roosevelt and Abraham Lincoln, but in order of presidency, the last two are actually the other way around. Their time as president, and the significance of the inclusion of each as part of the national monument are given below:

George Washington – 1789 to 1797
– the struggle for independence and the birth of the Republic
Thomas Jefferson – 1801 to 1809
– the territorial expansion of the country
Abraham Lincoln – 1861 to 1865
– the permanent union of the states, and equality for all citizens
Theodore Roosevelt – 1901 to 1909
– the 20th Century role of the United States in world affairs
and the rights of the common man

After Mount Rushmore I drove on to see the incomplete sculpture of Crazy Horse, about 17 miles further along the same road. I had been recommended this quite some time ago, when I first launched the 100goals website, and wrote about it in a blog article here.

Crazy Horse is another breathtaking sculpture, the scale of which is absolutely staggering. Apparently all four president’s heads of Mount Rushmore would fit in the area of Crazy Horse’s head alone!

It was begun in 1949 by sculptor Korczak Ziolkowski, who died in 1982, and work continues today, all funded primarily by paying visitors. Ziolkowski believed that Crazy Horse should be a nonprofit educational and cultural humanitarian project built by the interested public and not the taxpayer. I certainly feel proud to have made my contribution, and would love to come and see the completed work one day.

I loved the HBO TV series “Deadwood”, and it was only on the plane on the way up to Rapid City that I found out that Deadwood itself is pretty close by. So after seeing Crazy Horse I headed over there, and discovered that the town had had a big snowfall recently, and the streets were piled high with slowly melting snow.

I arrived just in time to see the most spectacular sunset over the city, viewed from Mount Moriah Cemetery, the infamous “Boot Hill” where “Wild Bill” Hickock and Calamity Jane are buried. It was very atmospheric up there as the darkness deepened, not another soul around, snow piled deep on the graves in a silent cemetery that was closed for the winter. I sat quietly for a couple of minutes with Bill and Jane before heading back into town to look for a motel. On the way down the hill I stopped when I saw a deer stood stock-still under a streetlight in the middle of a snowy side street, and we just stared at each other for a minute. What a place!

I couldn’t resist going out to one of the casinos that evening, and playing a few hands of 5-card stud, but fortunately the evening did not end with the pushing back of chairs and the quick-drawing of pistols, just me wandering back to my room through the snowy streets a few dollars lighter. I think I will need to brush up my game before taking on my $1,000 poker game goal!

I first became aware of the Devil’s Tower when I saw the movie Close Encounters of the Third Kind, in which the main character Roy Neary, played by Richard Dreyfuss, becomes obsessed with the mountain after a mysterious encounter. It is a very striking peak, and I decided to take a drive into Wyoming to see it.

The first view of the tower in the distance does cause a gasp, and on driving closer, the amazement does not diminish. It is an incredible sight, towering above the forests below. I took a walk around the base, which takes about an hour, and in that time have decided that one day I want to climb the tower and stand on the summit.

In the visitor centre, I found some words which reflected my feelings about the place, and echoed words I quoted about the Grand Canyon too. N Scott Momaday wrote in 1969, “There are things in nature that engender an awful quiet in the heart of man; Devil’s Tower is one of them.”

On the way back to Rapid City I made a detour back to Mount Rushmore to see the monument at night, lit up by powerful floodlights – quite spectacular. But it was very cold, and I didn’t hang around too long, the appeal of a warm motel room was strong!

Monday morning – what’s this – clouds? I wondered whether to head out on my planned journey for the day, but eventually decided to do so, hoping the weather might improve.

My first stop was at the historic Minuteman II Missile site about 70 miles east of Rapid City. The tour around the missile control site, and the missile silo which still houses one of the decommissioned missiles was fascinating, and very enthusiastically presented by knowledgeable guide Chris. At one time during the height of the Cold War, there were 1,000 of these missiles ready for immediate launch at a moments notice, and each missile warhead contained a nuclear explosive equivalent to 60% of all bombs detonated during WW2, including the two nuclear ones!! There are now Minuteman III missiles out there somewhere ready for use, with even bigger nuclear payloads aboard!

My final place to visit before returning the car and heading for the airport was the South Dakota Badlands. I had only heard the name before, and did not really know what to expect, but what a place! The name comes from the Lakota Indian name for the place, “mako sika”, which literally means “land bad”, refering to a difficult area to travel through because of the rough terrain. Have a look at the pictures to see what they meant.

All in all, I have had a fantastic weekend in South Dakota and Wyoming, and feel I have packed more than I had ever expected to into the couple of days I have had here. I just wish that I had come a little earlier in the year when it wasn’t quite so cold! But maybe if I had done that, there would have been so many more visitors at these amazing places. At almost every place, a couple of minutes walk away from the visitor centre would mean you could be totally alone in an absolutely incredible place! I think I have been incredibly lucky to have such fantastic weather at this time of the year. A real stand-out weekend!

Information on US Presidents 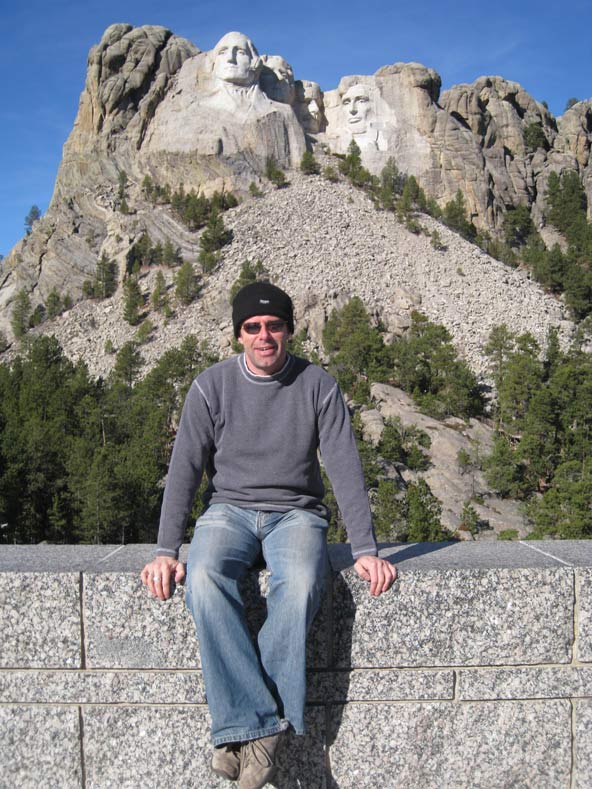