After the wingwalk I had to dash back around London to drop the car off at my brother’s house, and caught the underground into the city to meet some other Ian Ushers.

I have been trying everything I could think of over the past week to try to gather five of us, and by Saturday morning I had three other Ians confirmed, making a total of four of us.

I had been in touch with four or five other Ians from various parts of the country, but all had other engagements, or London was too far for them to come. I had hoped to be able to get the four of us in a car and drive to briefly meet one of the other Ians, but had been unable to get in touch with him to make arrangements.

So eventually I had to accept defeat on this occasion, and be happy with meeting three other Ian Ushers.

Ian (London) Usher had arrived at the pub just before me, and we got a couple of pints and sat down for a chat with the first other Ian Usher we had both ever met.

Sortly afterwards Ian (Portsmouth) Usher arrived, followed minutes later by Ian (Bristol) Usher. We had a couple of rounds in the fantastic old Glasshouse Stores pub, and got to know each other a bit.

We all got on pretty well, and the other Ians had some funny stories about how my eBay antics had impacted upon them. Ian from Portsmouth is about the same age as me, and had had many old friends contact him, asking if he was okay, and why he was selling everything.

And Ian from Bristol is an artist, and when setting up his website, his web designer couldn’t understand why they couldn’t get him a good ranking in a google search, until he discovered why… “Oh, that’s unlucky! You’ve got the same name as the guy selling his life on eBay! That makes it much trickier.”

The fire alarm went off just as we were finishing our second round, and we all ended up out on the pavement until things were sorted out, and decided that it would be a good time to head off to the Roundhouse in Covent Garden, where the new owners, Fuller’s Beers, had offered each Ian a socially responsible free two pints of beer. Free beer! Fantastic, thank you Fullers!

As the afternoon turned into evening the beers continued to flow, and we did a lot of laughing at unusual and entertaining situations that could occur. I mentioned that I had hoped to drive the four of us to meet a fifth Ian, but if I had borrowed my brothers old car, which overheats in busy traffic, I could picture a scene when we breakdown in central London. When the police turn up to sort it out, imagine them asking who was driving…
“Name?”
“Ian Usher.”
“And the others here? What’s your name?”
“Ian Usher.”
“Right! And you?”
“Ian Usher”
“Hmm, you?”
“Ian Usher”
“Right, you’re all under arrest!!”

Eventually Ian (Bristol) had to leave to catch the coach home. Ian (London) was next to head for home, and Ian (Portsmouth) and I headed for the tube, and I dashed headlong onto mine which was just about to leave.

Unfortunately by then I was pretty drunk, we had had a good long afternoon and evening, and I did not check the destination of the train. I also did the late night comedy trick of falling asleep almost immediately.

The Piccadilly line splits into different directions before my brothers house, and when I woke I was at a station I had never heard of before. It took a few drunken minutes of studying the tube map before I figured where I had gone wrong. Fortunately trains were still running back towards the city, and I backtracked, and eventually managed to find my way home. Two hours to do a journey that should have been about 40 minutes!

I woke with a fine hangover this morning… I’m never drinking again, I promised myself, as I have done many times before, and am sure I will do again in the future!

I cannot thank the other three Ians enough for coming along to meet a group of strangers that possibly had nothing in common other than a name! It was great that we all got along so well, and had a great evening. I really do appreciate the efforts you all made to be there.

It is a shame that the goal was not completed, but the other three are still all keen to help me achieve it, and also secure the $2,500 charitable donation from Sir Richard Branson, so hopes are not yet dead. 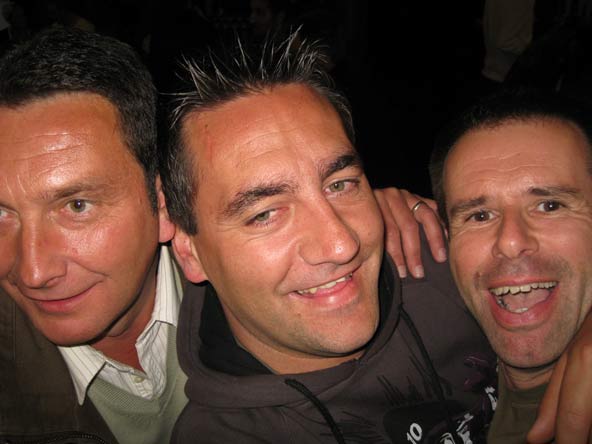 Thank you Ians, a brilliant night!