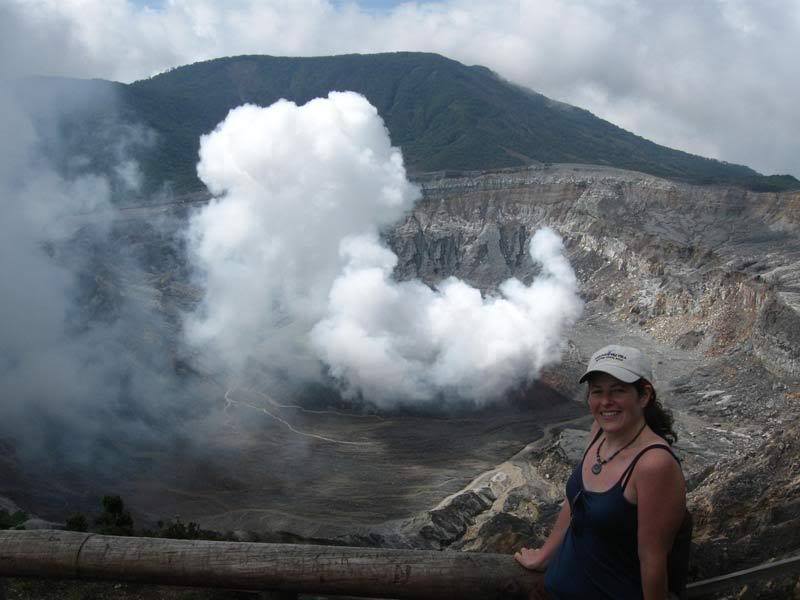 Another active volcano… and an earthquake!

On our last full day in Quepos, Moe and I were keen to go out on the horses again, and John and Jelene were kind enough to take us back to Finca Tranquila, despite not wanting to come riding a for third time. Raoul had our usual two horses ready, andpromising not to be too long, Moe and I were off.

We crossed the river again, and then chose a different track to the first ride we had taken out that way. With this being our last opportunity, I was keen to do as much galloping as possible, and Lucero and Vanessa seemed willing, and we covered distance pretty quickly.

My decision to wear shorts started to look a little mis-guided, as my calves started to develop a couple of new saddle-sores to add to my previous ones, but after turning for home the horses were still keen, and we galloped much of the way back. It was a wonderful experience, and I felt so much more at ease at speed.

Every now and then I would look over at Moe galloping along beside me, and despite the fact that we weren’t on a beach at sunset, this really felt exactly like I had hoped my horse-galoping goal would feel. I was in control and felt (reasonably) confident, and best of all, I had a wonderful partner at my side on another horse.

We stopped at a little bar and tied the horses up, ordered a couple of beers, and chatted with the friendly locals. The second beer allowed the horses to cool down properly, and then we crossed the river and headed back to the stables.

John and Jelene had been drinking too, and were lounging around by their friend Skip’s pool. We joined them, and unfortumately two beers and high spirits got the better of Moe, and I ended up in the pool fully clothed. Sadly, my camera was in my pocket, and was completely flooded. I think there may be a few less pictures on the blog for a while.

The next morning we took the little twin-prop Piper back across to San Jose, and as John had a meeting to go to, Jelene, Moe and I ended up with a vehicle and driver for the rest of the day. A trip to one of the volcanoes was soon decided upon.

I wonder if I could have simply taken the last year of goal-achieving off, and then then just come to Costa Rica to catch up. Once again I have revisited a previously achieved goal at the impressively active volcan Poas. It is a spectacular crater, with huge clouds of sulphuric steam rising out of the lake in the center.

Eventually we had to say our goodbyes to Jelene, who was staying at the luxurious Hilton Hotel. Our driver Alex dropped us off at our previous San Jose hotel in the city centre with a slightly worried “Are you sure you want to stay here?” I don’t think he was used to dropping his clients at such cheap digs!

At one point during the evening in the hotel room the bed started shaking and lurching. We looked at each other, thinking the other was doing something to shake it. But neither of us was, and we realised that we had just experienced our first Costa Rican earthquake! It turns out that it was a 6.1 magnitude quake!

The wonderfully luxurious holiday is now over, and we flew back to Miami last night, picked up a car and have just driven overnight to Tampa airport, where Moe now flies back to Canada, and I take a flight to Colorado.

It has been a fantastic week in Costa Rica, and I can’t thank Jelene and John enough for their kindness and hospitality. They have certainly allowed Moe and I to experience some things that we certainly wouldn’t have done otherwise. And my thanks also to Moe for being a wonderful travel companion for the last three weeks. I am certainly going to miss her when we go our separate ways. But I am hoping that maybe this isn’t quite the end of this story just yet. Watch this space!!