5.30am seemed to come very quickly, and I was very comfortable in my sleeping bag, but it sounded like many of the others were up and about, so I dragged myself out of bed. It was still dark, and the sky was incredibly clear. Breakfast consisted of a handful of granola, and a breakfast bar, and a much appreciated cup of tea kindly provided by Eric.

The trip from camp to the trailhead in Tim’s 4WD was extraordinary. I have never travelled on such rough roads, up and up into the mountains, an amazingly steep gorge dropping away right beside us. This trail made yesterdays trip up to Crystal look tame by comparison! Eventually we climbed out of the gorge into a huge basin surrounded by mountains on all sides, where we met John, who would also be joining us again, having missed the second day. The sun was coming up, and the views were stunning. We soon geared up, and headed on upwards.

The day’s climb was much steeper and rockier than my previous 14ers, and although a bit slower than many of the others in our group, I felt pretty good, and climbed steadily at my own pace, making good progress. I even managed a bit of a conversation with Brian, Eric’s son, until he took off at speed again.

The climb became even steeper, and before the peak, Loren sat astride a large buttress pointing the way. I opted for the more difficult climb, and really enjoyed the approach to the peak.

The peak of Mount Sneffels is 14,150′ high, and offers a fantastic view of the surrounding mountains. Conditions were clear, and there was hardly a breath of wind. It really was amazingly beautiful. After the obligatory summit photos were taken, and the summit log book signed, any of our group soon started to head down. I held back, as did Loren, and as everyone else disappeared, we sat and enjoyed the view in silence. Colorado is truly a stunning, and very special place.

But the day’s adventures were not yet over! After the return to the vehicles, we went back down to Ouray, and enjoyed both the hot springs and the beer festival in the park, followed by a fantastic Mexican meal. It is a lovely town hidden away at the end of a cliff-sided valley.

The next part of the journey took us over Engineer Pass, which goes from Ouray to Lake City, the highest point being 12,800′. It is an incredibly steep climb, over the roughest roads I have seen so far, and that really is saying something, after the roads I have seen so far! But the most incredible thing was that Loren elected to take his old Subaru Legacy over the pass too, along with the other 4WD vehicles.

Loren had bought the Legacy for $1,200, and it had over 160,000 miles on the clock. For those not familiar with the model, it is an all-wheel-drive vehicle, but has no extra clearance, and is really only a standard family vehicle. What Loren managed to do with it was brilliant, and the most entertaining part of the trip so far. The only damage was a broken fog lamp, and a couple of dents in the sills and floor pan. A truly awesome drive! I have loads of video of the amazing drive, but until I get it edited, here is one picture that might give you a bit of an idea of how mad these Colorado guys are! 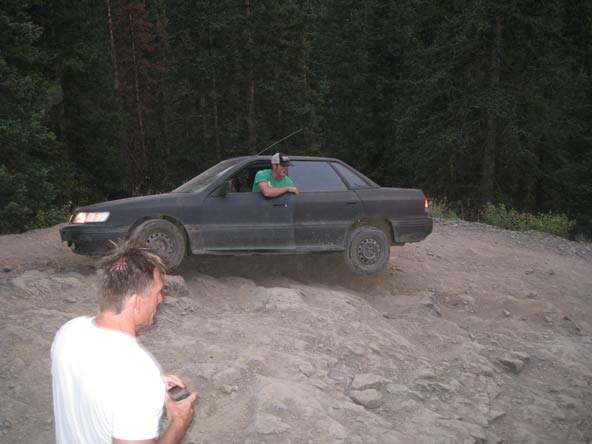 It was pretty dark by the time we got over the scary 12,800′ summit of Engineer Pass, and I was sort of glad that I couldn’t see the drop-off for most of the journey. We decided not to bother with tents, as it was so late, and simply emptied the truck beds out, and slept in the back of the pick ups. Alarms were set, and we looked forward to another 5.30am start! Five peaks in four days so far!