When planning a couple of the more expensive goals on the list, I ran into a few problems. Initially I had planned to go to Russia to experience a weightlessness flight, and a flight in a MiG fighter jet. However, I ran into two problems. The first was that the flight in a MiG cost anywhere between $12,000 and $16,000, depending on the package chosen. Without a book deal signed yet, and without having done a stroke of work for over two years now, finances will no longer stretch to this, so it was back to the drawing board.

The second issue was that the plane that the Russians use for the weightlessness flights is currently out of commission, and not expected back into service until October!

So it was back to Google Search, where eventually I discovered Howard Chipman, and his Florida-based company Aurora Aerospace. Howard operates weightlessness flights in his Rockwell 700, and also has an L-39 fighter jet trainer, and offers a flight in this as an add-on to the weightlessness adventure.

After a few emails back and forth we worked out a date, and this morning Moe and I turned up at the St. Petersburg/Clearwater airport, where we eventually found Chip and his partner Veronique, and started preparations for my L-39 jet flight.

While not quite a MiG, the Czech-built L-39 is a fighter jet used by many airforces around the world as a trainer for the MiG, and has many similar characteristics. It is a beautiful, sleek machine.

Kitted out with flight suit and a helmet, I was briefed and we headed out to the plane. In the cockpit I had a further briefing, and paid particular attention to how the ejector seat worked. I kept my hands well away from the big red handles.

The L-39 sounds just as good as it looks when the jet fires up, and we powered up and taxied out to the runway. Takeoff was fast and smooth, and the climb to height was impressively quick.

After a few easy turns Chip handed the controls over to me, and I tried a few turns. The controls were light and responsive, and it seemed very easy to turn quickly. We moved on to rolls, and after a couple of demos, I managed a reasonably satisfactory effort, followed by a much more confident roll. The plane handled so well, and was such fun.

We did a couple of stalls, and a steep climb to a stall called a tail slide, which results in a spectacular fall into a steep dive.

As we headed back Chip asked what else we should do, and I asked him to show me what the plane was capable of. Wow! He threw us around the sky through a series of linked manoeuvres that was like the fastest rollercoaster ever. The G-meter in the cockpit showed maximums of +4.1G and -0.5G, which Chip seemed very pleased with.

We finished with a low pass along the beach, dropping down to around 200 feet, and then did a fast low pass over the airport, followed by a steep final climb. What a stunning experience the whole flight was.

I have lots of video, and will try to get around to editing as soon as I can.

After lunch Moe and I were briefed for the weightlessness flight by Veronique, who would be our instructor and assistant. We were flying in a Rockwell 700, apparently one of only 30 of these planes still flying. It was carpeted and fitted out very nicely, but almost completely stripped of everything in the rear for floating around in.

The weightlessness flight involves taking the plane up to height, putting it into a dive to build up speed, then pulling it back into a very steep climb. The G-force at the bottom is around 2G. At the top of the climb the plane is pushed over towards another dive, and at the top of the parabola, there is a period of zero gravity for around 10 seconds.

I went first, and tried a sitting position, then kneeling on the second parabola. Lying flat on my front, and then on my back were fun, and the next two I tried with a couple of other small objects floating, and releasing some water from a water bottle, which was fantastic. The final parabola was a somersault, assisted by Veronique.

I strapped myself back into my seat, and it was Moe’s turn. Looking out of the window, I was amazed at the incredibly steep angle of climb. And then watching Moe seem to magically lift off the floor of the plane was amazing. I hadn’t really appreciated how odd it must look when I was doing it. She followed the same progression, and it was very entertaining to watch.

For the last couple of parabolas we got to lay together and float up at the same time. Once again, what an extraordinary and incredible experience.

Although not one of the usual experiences on offer, Chip agreed to fly straight and level at around five and a half thousand feet for 15 minutes or so, and with the curtain to the cockpit closed, goal 87 was achieved too, in much more comfort and luxury than the more common commercial airliner lavatory location.

No further details or description needed or available for this goal, I’m afraid! 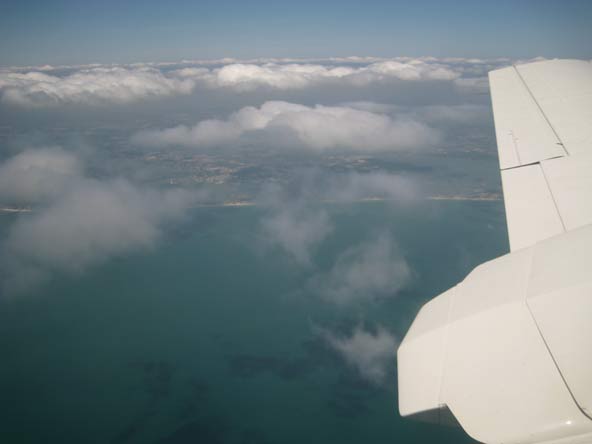 On the return to the airport, we discovered that the excitement of the day wasn’t quite over, as one of the three landing wheel lights refused to come on. We didn’t know if the wheel hadn’t come down, or if it hadn’t locked into place, or if the light was at fault. A test of the light indicated that all was fine there, the problem was more serious. Chip told us that a gear-up landing may be necessary, but that people “usually walked away from them”!!

Eventually the problem was resolved by some sort of manual back-up system, but the landing was a little tense, and Chip put the Rockwell down very lightly, putting as much of the landing impact on the right wheel, not the suspect left one, and all went well. The whole incident was dealt with incredibly calmly and professionally, and Moe and I felt very much at ease in such capable hands.

What an incredible day! Huge thanks to Howard and Veronique at Aurora Aerospace for their incredibly professional and friendly service. What an amazing couple, very inspiring. Thanks too to Moe for being a wonderful partner on these goals. One in particular I couldn’t have achieved on my own!

After a quick shower we met again with Cari, and her husband Mart for a lovely celebratory Thai dinner at the lovely little restaurant right next to our hotel. The perfect end to a brilliant day.