Tiffany offered to take us up to Park City, where Utah’s Olympic Park is located. She was running a little late in the morning, but all worked out well, as when we arrived the bobsled had not started running yet, as there was an aerial ski jump display just about to start. What great timing!

There are several big ski jumps there, and a fantastic ski jump training facility, with huge ramps, and jumps of various sizes, all into a swimming pool. The display team consisted of quite a few olympic team members, and was very spectacular. The height of some of the bigger tricks was incredible. I have added another goal to the bottom of my list, and would very much like to come back here one day to do their beginner’s training course.

After the show we jumped in the minibus to the top of the bobsled track. Susan and I were the only ones going to do it, as Tiffany unfortunately has a recent neck injury (so she said!), and here two kids Ben and Hannah did not seem too keen either. I’m not surprised, it looked very fast from the run we saw set off before us.

Once all the waivers were signed, and we were issued with helmets and instructions, we climbed into position behind our worryingly young driver, Carter, and clipped ourselves in. The lights turned green, our helpers pushed, and we were off!

The ride started slowly, and the first two or three corners were pretty tame, but as we picked up speed quickly the corners became tighter and longer, and the G-force was very strong. We were thrown from side to side, and in front of me I could see Susan’s head forced down onto her chest, which gave me a great view forward. The corners looked amazing as we banked around them high up the wall.

Carter did a great job, and very soon we ended up at the bottom of the track, still in one piece. What an incredibly thrilling ride. I seriously considered a second go, and would have definitely done so if I could have taken my little camera with me in the camera glove I made for it, but they wouldn’t let me! I can see why though – it’s a pretty wild ride, and you really do have to hang on tight!

Afterwards we went on both of the steep ziplines they have there, one of which comes down at about 55mph over the 120m ski jump. We also tried out the toboggan which has small sit-on carts that run down a fast, twisting stainless steel track, very similar to the one I did in Chamonix last year.

Olympic Park is a fantastic place, and Ed at the front desk was kind enough to offer us a great discount too. I really hope to be back soon to try some ski jumping, and maybe the winter bobsled ride too.

Thanks again to Tiffany, and her kids too for their patience during the day, and to Susan for joining me in achieving another great goal. 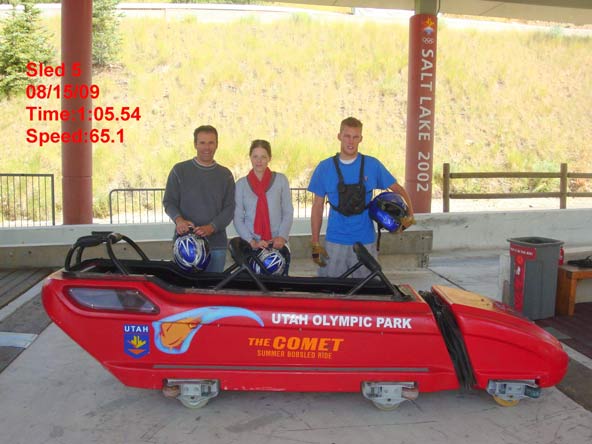