Lilly, Nicole, Chris and Leo Jr. joined me this morning for the journey into the city, and from Penn Station we took the Subway south, and made our way to Battery Park. They had been with me when I achieved my first US-based goal, visiting the Statue of Liberty back in October 2008

It was a beautiful hot day, and the ferry to Liberty Island was packed. On the island we made our way to the base of the flagpole again, and waited for Linda and her mum Nancy to join us from the New Jersey side of the river. Linda had taken me to ride Kingda Ka rollercoaster, again back in October 2008.

At the statue once again, almost two years since I was last here, it seemed that the time had passed so quickly. And yet at that time I was less than ten weeks into my 100-week adventure, and I have packed so much into the ninety weeks since then.

At that time, it was only possible to go up to the base of the statue, but today the statue is open again, and we had tickets to get up into the crown. Unfortunately, the ones I had given to Lilly and family had different names on, and could not be transferred, and ultimately, only Linda and I reached the crown, Lilly and family heading for home again after going up as far as the pedestal.

Gazing out over the magnificent view from the crown, I enjoyed a quiet, reflective moment, and thought about all of the amazing things I have done over the past two years, and the wonderful people I have met. I don’t think that it has quite sunk in yet that the journey is finished.

Coming back down to the pedestal, I was surprised and pleased to be met by Essi, who had shared the amazing experience of the Festival of the Dead with me in Mexico.

In the afternoon, having said goodbye to Linda and Nancy, Essi and I headed for Central Park, arriving an hour late at the location I had picked for any final people to meet us. The “Sheep Meadow” was huge, and packed. Even meeting up with Essi’s friend Malick took some co-ordination!

Thanks to a vendor selling under-cover beer in the park, I finally got to enjoy a Heineken in the sun. The park was such fun, with roller skaters, drumming groups and buskers all adding to the holiday atmosphere. One guy had a sign offering “Free debate about whether we have freedom of choice!” I was tempted to have a chat with him, but decided against it! Haha!

After dinner the three of us battled through 4th July crowds, and watched the fireworks over the Hudson River. We had left it a little late, and couldn’t get too close – the crowds were amazing, and most approaches to the waterfront were closed off by the police, but we managed a reasonable view.

The walk back to Penn Station was fun in the huge, friendly crowd, and saying farewell to Malick and Essi, I caught the train back to Long Island.

So, that’s it! The journey is over. It is exactly 100 weeks since I got on the plane from Perth to Dubai on Sunday 3rd August 2008.

And what a journey it has been. I have made many fantastic new friends, seen some incredible things, and enjoyed more than my fair share of experiences of a lifetime.

I have felt the amazing highs of achievement, happiness and love, and the lows of disappointment, lonliness and despair, and every emotion in between. I have often told people that a journey such as this feels like living life with the volume turned up to eleven! The highs are higher, but the lows are lower too. This is something I want to explore much more in the book I have started about this whole adventure.

As the final day of my long journey, I could not have asked for a better day than today. Lilly, and her kids Nicole, Chris and Leo Jr. were wonderful companions to spend another day in New York with, and it was great to see a few more familiar faces from my journey too. Thanks to Linda and Nancy, and Essi and Malick, who all helped make the day very special.

What a wonderful end to an amazing journey. 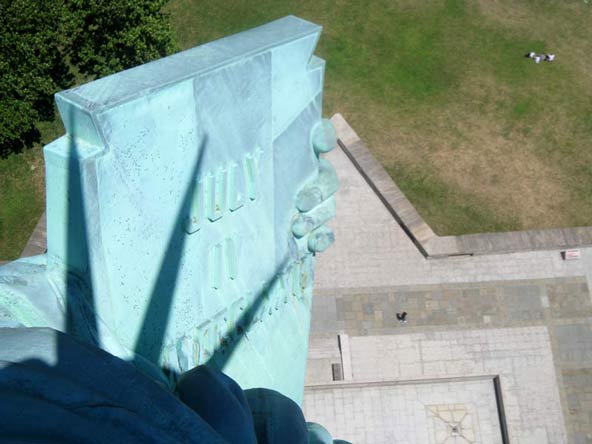