What a day! I was up pretty early, and packed my bags again, ready to leave Darlington once more, and head south on the next leg of my adventures. After a quick farewell to my mum, I hit the road, and two and a half hours later arrived again at Colin’s house at Stamford.

Colin Furze is a very interesting guy, and owns a homemade “Wall of Death”, built in a friend’s field, and was kind enough to allow me to come and have a try at riding it. I had called in on my way north a week and a half ago, and was quite alarmed at the run-down appearance of the wall, but excited too at the prospect of having a go on it.

Over the last week, Colin had cleaned out most of the thistles from the bottom of it, and prepared two Honda scooters for the day.

Getting the bikes into the interior area of the wall was treacherous enough, involving a tricky ride up the steep ramp, stopping just in time to avoid plunging into the deep hole at the top. I wisely left this tricky operation to Colin.

Once inside the wall with both bikes, Colin fired one up, and headed around and up the wall. He said he was pretty rusty, as he hadn’t ridden the wall for a year and a half, but I watched in amazement as he worked his way pretty quickly up on to the vertical section several times.

After a bit of fiddling around with the older, tattier looking bike, which we couldn’t get started, Colin foolioshly offered to let me try on the better bike, which was the first mistake of the day. My theory was to attack the wall with confidence, much as Colin appeared to, and did so. This was the second mistake!

Before I had managed the second circuit, I had the bike onto the vertical section, but having never experienced such a thing, my natural motorcycling reaction was to try to get the bike upright, and before I knew it, I was sliding down the wall behind the bike, which had obviously lost all grip! I scraped my arm a bit, but otherwise was okay.

Colin pretty quickly put some extra effort into getting the older bike running, suceeding this time, and after a bit of a pep-talk, I was off again. The idea is to progress upwards a bit more slowly at first, and lean more…. much more.

I really had imagined that it could not be too hard to do, but was a bit frustrated at my slow progress. It is SO much harder than you can possibly imagine! After three or four circuits you end up incredibly dizzy and disorientated. And the hardest part is to overcome the natural reaction to want to be upright.

But I persevered, taking regular breaks to stop the mental spinning effect, and then back to it. The wall itself is very ramshackle, and pretty bumpy, and there are quite a few potholes in the 45 degree-angled section. The vertical wall is a lot smoother, apparently, but it is a huge mental hurdle to get up there.

But after a couple of hours I was getting up onto the vertical for short stretches, which I tried to make longer and longer, but it really is very visually and physically disturbing!

By the end of the day, I was confidently riding at the transition point between the 45 degrees and the vertical, and getting up onto the wall regularly, but could not quite stay up there!

And now, relaxing afterwards, I feel a strange mixture of elation and frustration. In a way, I am enjoying the fact that it is a much, MUCH harder skill to master than I thought it would be, but am also disappointed by the fact that I still haven’t done a complete circuit on the vertical wall.

However, like many things in life, if it was easy, everybody would be doing it, wouldn’t they? I feel that I can say that I have achieved my goal of riding a “Wall of Death”, but I want to do better. But I still have more time tomorrow to crack it!

Huge thanks to Colin, and mates Mark and Lee, who gave up a huge amount of their time today to help me, and to everyone else who came along and offered support and encouragement. What a day! I can’t wait to get back to it tomorrow again!

See all of Colin’s videos, including his awesome Wall of Death building, crashing and riding videos, on his YouTube channel here:
Colin Furze’s YouTube Channel

There will be a follow-up blog early next week on day 2 on the wall, with more pix, and video too, once I get it edited. 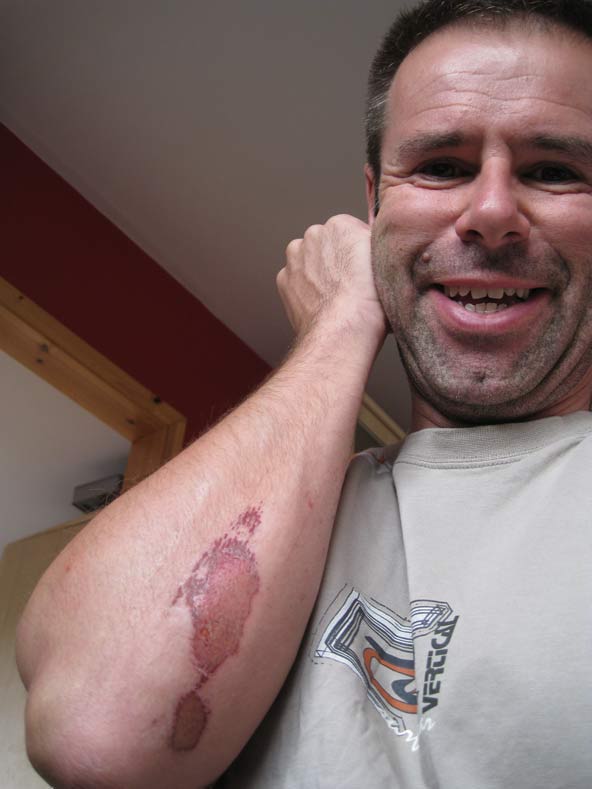 To see videos of my attempts to ride Colin’s Wall of Death, take a look at this post:
“Better late than never”