The goals that I am currently working on all require some form of daily input, and I have always struggled with routine and to some extent, self-discipline. I always find it easier to tinker around with something inconsequential on the computer than get up and head for the gym, for example.

So for the next three weeks, until 1st July, when I fly to New York, I am going to try to be accountable to both myself, and any blog readers still bothering to follow my ramblings. I plan to maintain a daily list of what I have done towards each of the eight goals I am working towards. These are:-

Learn to ride a unicycle
Develop a six-pack stomach
Learn the harmonica
Learn how to lucid dream
Set up the “BlindsidedNetwork” support forum
Raise $50,000 for charity
Night skydive
Book deal for 100goals

I will keep this updated at the bottom of any blog that I write. See below for progress to date.

Over the past few days I have been doing pretty well, but have still managed to fit a few other activities in too. On Sunday, with both Val and Brenda off work we decided to go to see the “Cave of the Winds” not far from here. It was high up in a spectacular valley, and was an interesting show cave, with plenty of narrow passageways. Unfortunately, in it’s early days as a showcave when first discovered, a lot of damage was done to many of the formations.

On Tuesday evening Val and I went on a local pub run, which involved a run of around four miles, finishing at Jack Quinn’s Irish Pub in the city centre. Val and I are turning out to be ideal training partners, as Val is more enthusiastic about excercise than I am, so he can and does push me a bit. However, he also seems to be more enthusiastic about beer too, and I have to hold him back a bit there. At the end of the run, at the pub, we drank only water, despite Val’s loud protests!

When we got back Val insisted I try out the unicycle that we had borrowed from his work colleague Laura. I’m progressing well on it so far.

Brenda headed off on Monday morning, working away for the week, and has been kind enough (and trusting enough!) to lend me here lovely Toyota convertable. So this morning Buddy and I set of for Val’s mum and dad’s house.

Dick had offered to take me out shooting, and we drove out into the countryside to his buddy Ed’s place, where we could shoot all we liked. Dick had brought along a veritable arsenal, and we fired three different .22 rifles, two .22 pistols, and two larger bore rifles too.

All were great fun, but my favourites were the western pistol, particularly with the quick-draw holster (I couldn’t help playing the cowboy a bit!), and the Mauser, which was very accurate. The tin cans didn’t stand a chance! I also liked firing the .303, which has a big kick-back, and reminded me of firing the same guns when in the cadets at school. Many thanks to Dick for a fantastic afternoon out. 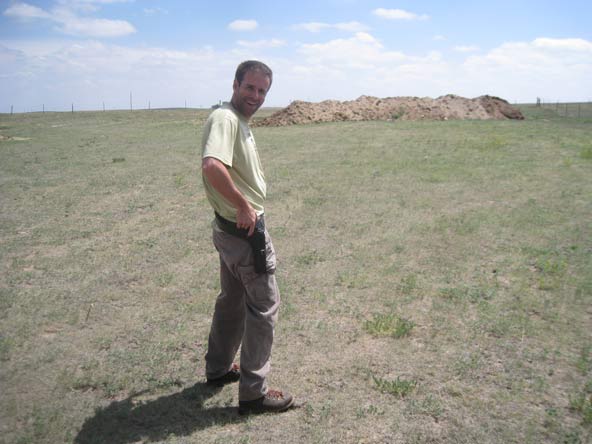 Wednesday 9th June
Learn to ride a unicycle – 15 minutes practice
Develop a six-pack stomach – nothing, taking a bit of a rest today
Learn the harmonica – nothing yet, but 10 minutes planned after blog is written
Learn how to lucid dream – nothing
Set up the “BlindsidedNetwork” support forum – nothing
Raise $50,000 for charity – nothing
Night skydive – nothing
Book deal for 100goals – nothing